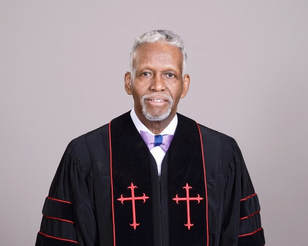 DR. ROBERT G. MURRAY is the 19th pastor of the Historic First Baptist Church, Bute Street, Norfolk, Virginia, a church celebrating over 200 years of Committed Christian Service.  Pastor Murray has been a pastor for more than 35 years and has been at First Baptist Church since 1983.  He brings a visionary approach to ministry with an emphasis on revelation and relevance in preaching and teaching the gospel.  He led the people of God at First Baptist Church in Norfolk in the renovation of the New Shepherd’s Village @ Park Avenue, an assisted living facility, and the construction of a 38,000 sq. ft. facility, The Murray Center, which contains the READY Academy Christian School, the Taste ‘N See Banquet Facility, the Renew Counseling Center and the church’s Administration Wing.
Dr. Murray is a graduate of Hampton University, Hampton, Virginia and the Boston University School of Theology, Boston, Massachusetts where he earned both his Master of Divinity and Doctor of Ministry degrees.  He also studied at Robert College, Istanbul, Turkey as a Foreign Exchange Student.  He served as adjunct professor at Virginia Commonwealth University in the department of African-American Studies and Religious Studies.  He taught Social Ethics and Homiletics at The Samuel Dewitt Proctor School of Theology, Virginia Union University, Richmond, Virginia.

Dr. Murray is a former President of the Baptist General Convention of Virginia.  During his tenure, he initiated a $1 million funding drive for the Baptist General Convention Foundation.  He presently serves as the chairman of the Foundation Fund’s Board of Directors that manages the Convention’s invested funds.  For more than 21years, Dr. Murray served as the Recording Secretary of The Lott Carey Foreign Missionary Convention and Vice President. He is a former President of the Lott Carey Baptist Foreign Missionary Convention.

He has also served as president of the Minister’s Council of ABCOTS.  For four years, he was chairman of the Board of Directors of the William A. Hunton YMCA, the oldest African American YMCA in America.  He is a member and the host pastor of The Tidewater Metro Baptist Ministers Conference.  For ten years, Dr. Murray was a freelance columnist for the New Journal and Guide Weekly Newspaper, and his Church School Commentary, “Notes For Your Notebook,” was widely read.  He has a printed sermon, “Kids for the Kingdom,” in the book From Proclamation to Practice: A Unique African-American Approach to Stewardship.

Dr. Murray was the Series Editor of the Baptist General Convention’s evangelistic five-volume book series entitled, “Empowering the Church for Kingdom Readiness.”  He collaborated with members of his church in 1988 to publish a 309-page book on the 188-year history of First Baptist Church.  He also led the Archives and History Committee as editor of the book, The Historic First Baptist Church Celebrating Two Hundred Years of Christ-Centered Ministries To The Community.  This well documented book irrefutable establishes this predominately African- American Church as the oldest Baptist Church in Norfolk, Virginia.

He has received numerous plaques and citations from local organizations for his community service, and he has also been distinguished by his alma mater, Hampton University, with the outstanding Twenty-Year Alumnus Award.

Most of all, Dr. Murray is a dedicated Christian.  He is married to Amanda Battle Murray and they are the grateful parents of three adult sons, three daughters-in-love, and four grandchildren.